Do you care about the environment?
Put your money where your heart is!

Some Algonquin Park business owners are leading the way

When you visit Algonquin Provincial Park, it's like entering an ever-changing painting. It's easy to see why artists such as Tom Thomson, and many others, have been so enamored with this special environment.

This is a wild, yet sensitive place that attracts and inspires people in different ways and, for some, provokes action. Such is the case for Kim and Marilyn Smith. Since taking ownership of two historic facilities in the heart of Algonquin Park, Camp Tanamakoon and Bartlett Lodge, they have been taking steps to better care for the environment. Now, those steps are becoming leaps and bounds, spanning every aspect of their businesses, from site-friendly septic systems to solar-powered buildings and electric boat motors.

The Smiths purchased Camp Tanamakoon in 1984 and soon set about making the busy girls' camp more environmentally friendly. They began taking similar action at Bartlett Lodge almost immediately after buying it in 1996. Both sites are accessible only by water and this, in part, may have dictated which projects took priority as they began what has become an ongoing journey to minimize their environmental impact. 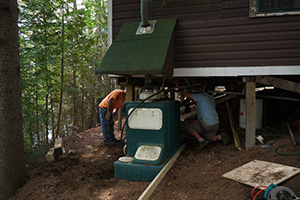 Dealing with waste was first on the agenda at Camp Tanamakoon. In 1986, the new owners began having large composting toilets installed - each unit serves 30-40 people - and gradually added more over the years. Currently, composting toilets accommodate about two-thirds of the camp's total summer population. The rest of the waste is dealt with by a customized septic system that recirculates the effluent through a series of cloth filters, and the end results are safe enough to pump onto the ground.

A very different but equally site-friendly septic system was installed at Bartlett Lodge in 1997. This type utilizes live peat moss filters and aeration to purify effluent waste and, Kim Smith says, it's the only such system he knows of in within the park. It is more expensive to build and maintain than the traditional tile-bed septic system but, he points out, it's a better option for remote, sensitive locations.

Cost is a certainly a concern for any business owner but, through these and other projects, the Smiths demonstrate time and again that caring for the environment is a priority, and this attitude extends beyond their immediate environment in Algonquin Park. Another significant choice they've made is to sign on with Bullfrog Power, the first 100% green electricity retailer in Ontario. Individuals or organizations can join - and many have, from Margaret Atwood to Wal-Mart Canada - and, essentially, they pay a premium for renewable electricity; the company ensures that the same amount of energy its subscribers use is fed into the grid, but Bullfrog Power comes only from EcoLogo-certified low-impact hydroelectric and wind sources rather than nuclear or fossil fuels. 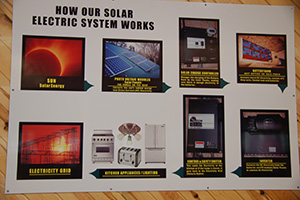 Bartlett Lodge and Camp Tanamakoon are promoting the use of clean, green energy through the Bullfrog Power program but the Smiths are also working on reducing the need to draw electricity from the grid at all. So far, one cabin at the lodge is fully unplugged from the provincial power supply, and solar power helps offset consumption in a variety of ways at both facilities. A log cabin called Sunrise relies on the sun as its primary power source, fueling up through two solar panels on the roof. One panel provides electricity and the other feeds a solar-thermal water heating system.

Sunrise, however, goes further than merely being off the grid. The Smiths have spent a little extra to equip this cabin for a more complete environmentally friendly experience. It has a two-stage flush toilet and, when heat is needed, a compact woodstove that burns pressed shavings. As well, if the nights are cool, guests can snuggle beneath blankets made from corn fibers. Although Sunrise was just built in 2003, people are already requesting it.

In a similar vein, Silver Birches and Northern Lake, two older cabins with standard electrical wiring, were recently retrofitted with a solar panels and an inverter. Both cabins are now powered by the sun. When extra power is generated here, it can be fed back into the province's grid. Other solar/inverter systems at both Bartlett Lodge and Camp Tanamakoon are capable of doing this and, when the businesses are shut down this winter, their solar panels will still be producing power. Last winter, the camp's system sold power back to Hydro One, Kim Smith says, and now that the lodge has a similar arrangement in place, he anticipates it will do the same. 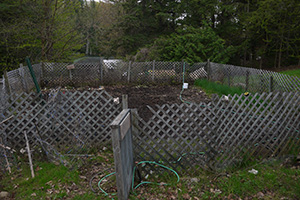 At both businesses, the largest power draws occur in the kitchen. Each facility now has state-of-the-art solar thermal equipment that preheats water for use in the kitchen and, as needed, an on-demand propane water heater gives it an extra boost to attain the commercially requisite 120-140¼ F. Likewise, solar power preheats water for the camp's showers and, to minimize water consumption, low-flow showerheads have been installed.

Water, in every way, is a concern for the Smiths, especially because their sites are accessible only by water. Bartlett Lodge is only a short distance from the Cache Lake public dock but, if you care about the environment, even that must be considered when regularly ferrying guests back and forth. Instead of relying on noisy gasoline-fueled outboard engines that pollute both water and air, the resort has invested in a clean, efficient electric motor for its main water taxi. A 3-hp Briggs and Stratton motor is hearty enough to propel an otherwise ordinary pontoon boat smoothly and quietly across the lake, drawing power from eight deep-cycle rechargeable batteries hidden beneath the passengers' seats.

This electric boat motor is likely to be the first of several, says Kim Smith, for the fleets at both Bartlett Lodge and Camp Tanamakoon. In the fall of 2007, 8 new composting toilets were added to Camp Tanamakoon. 80% of the camp population is now serviced by toilets that use no water at all!!!

The Smiths intend to keep taking steps to minimize the environmental impact of their business endeavors and to promote awareness of what can be done. In some situations, it requires a little extra initial expenditure but, in the long run, doing what you can to protect the environment pays off, and everyone benefits.

At Tanamakoon girls ages 4 - 6 can have their first overnight camp experience for 3 days in early or late summer.

The Tanamakoon Outdoor Centre has operated for 27 years, for co-ed school groups mid May to mid June and the last two weeks of September.

Spend quality time in Algonquin Park with opportunities to share a variety of experiences with like minded, interesting people from fifty five years onward.