A BRIEF HISTORY OF CAMP TANAMAKOON 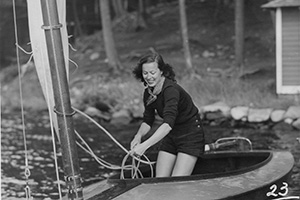 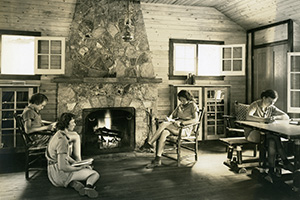 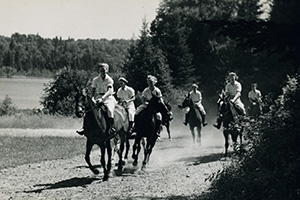 Tanamakoon was started in 1925 by Mary G. Hamilton, principal of Margaret Eaton School in Toronto. Miss Hamilton chose the site where the camp stands on the shore of a sheltered bay of Tanamakoon Lake, then known as White's Lake.

"Here in close relation with training courses in physical education at University of Toronto, young women specialists in that subject learn the value of outdoor life, and go out to all parts of Canada as leaders in camp and health activities. A lodge, theatre, infirmary, craft shop, workshop, offices, cabins and tents, all contribute their share to the varied activities. "Quoted from the book "The Call of Algonquin" by Mary G. Hamilton

Mary G. Hamilton was born and brought up in Fergus, Ontario where her Grandfather was one of the original settlers in 1834.

Miss Hamilton was a pioneer in Physical Education, organized camping and Principal of Margaret Eaton School in Toronto 1926-1934. She founded Tanamakoon in 1925 as need of a summer camp for girls arose through her work with the students of physical education at the school, plus, undertaking such a venture had a strong appeal. She continued as director until retirement in 1953.

In its early days campers would arrive by train at Algonquin Park Station on Canoe Lake. To be transported to the camp by canoe and motorboat (for the non paddlers).

In l953 Ralph and Elizabeth Raymer assumed ownership of Tanamakoon. Mrs. Raymer was a former camper, counselor and Senior Staff member at Tanamakoon. She was hand-picked by Mary Hamilton as her successor. The Raymers owned and directed Tanamakoon until 1974.

Since 1984, Kim and Marilyn Smith have owned and directed Tanamakoon. Tanamakoon remains a traditional summer camp where girls from all over the world come to spend those memorable summer days in Algonquin Park. For 30 years the Smiths have guarded the Tanamakoon traditions and developed programs and facilities that provide leadership opportunities and teach basic human values while having fun in a safe, nurturing wilderness environment.

At Tanamakoon girls ages 4 - 6 can have their first overnight camp experience for 3 days in early or late summer.

The Tanamakoon Outdoor Centre has operated for 27 years, for co-ed school groups mid May to mid June and the last two weeks of September.

Spend quality time in Algonquin Park with opportunities to share a variety of experiences with like minded, interesting people from fifty five years onward.